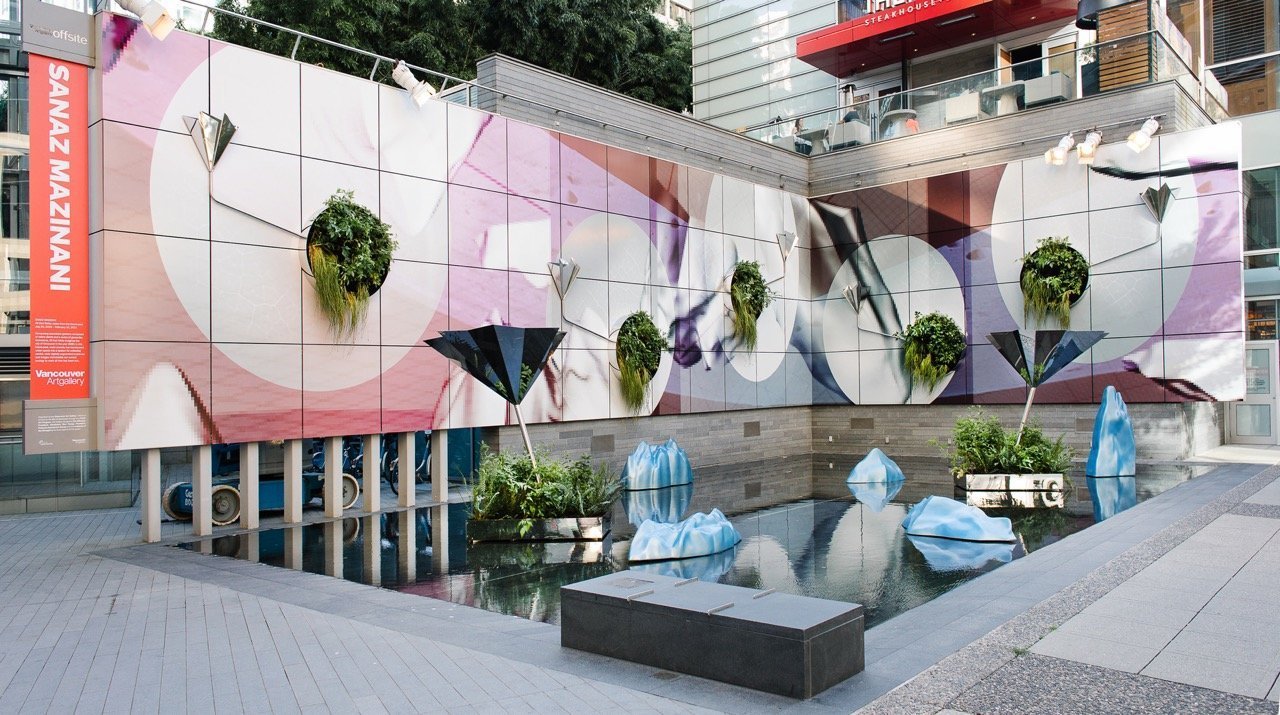 Artist Sanaz Mazinani describes her vision for the project

What myths will need to be created to tell the story of our current earth? What narratives will develop to explain the profound ecological changes that occurred in the first decades of the 21st century, when a society driven by technology, capital, and industrial activity transformed the planet in unprecedented ways? Where and how will these changes be documented and transmitted? Registered and made available to the historical imagination? All that Melts is one vision of that future history; not simply the image of a scientific model but a mythological space that is inhabited by the consequences of its recent past. A story of the earth as told by the culture which co-produced it. Part elegy, part warning, it is a poetic meditation on a time to be from a time that was – a geomythology for an era gone by.

Taking as its starting point the year 2080, the installation reflects on a near future where the rise of global temperatures has melted the glaciers of British Columbia and throughout the planet, causing ocean levels to increase dramatically. Along with continued population growth, it has been shown that Metro Vancouver will have significantly longer, drier, and hotter summers – a climatic shift that will in turn require a fundamental rethinking of water use and conservation. This transformation will also provide an altered growing season, allowing certain species of flora to thrive and others to suffer depending on their various ecosystem needs.

These conditions establish the parameters in which the 5 calved glacier forms of the installation drift in their own meltwater. These forms – morphed versions of the last icebergs seen by the people in this location – are integral figures in a geomythology to come. Recognizing that in many indigenous populations geologic events have long been recorded and expressed in mythological language, this approach expands the perceptual toolkit for registering change to the environment. Mythology has its own precision, often developed from knowledge of the land based on careful observation of physical evidence which often anticipates what science will only later show.

Before archaeologists were speculating about an ice age civilization built in the low marshy basin of what is now the Persian Gulf, middle eastern deluge myths of early Mesopotamia tell the story of a great flood brought about by angry gods disturbed by humanity’s ceaseless noise. When the Sumerian water deity Enki whispers to Atrahasis, the tale’s hero, of the coming apocalypse, he does so from a reeded landscape that itself will soon be disappearing beneath a massive surge of water. Landscape change in the post-glacial gulf is recorded as much in these narratives of civilization-destroying floods as through the use of any modern instrument. And parallels can be found across diverse mesoamerican and indigenous mythologies, where embedded in destruction/creation stories of seismic planetary events are warnings about human power and the danger of living out of harmony with the natural world. Myths of water, change, and loss form part of a collective memory which can serve as a check against exploitative and abusive behaviour, and a remembrance of the consequences of ignoring this vital information.

In this critical moment of social and ecological change, coastal cities will be forced to adapt. This installation imagines the needs for 2080 and a longing for what is already lost using a series of water catchments and speculative gardens of native plants threatened by this coming situation. The impermeable and unforgiving architecture of commercial urban space must be re-imagined as a critical piece of environmental infrastructure. In times of drought the renewed importance of fresh water will transform each rainfall and every surface into an opportunity to gather and sustain precious coastal life of both people and plants.

It is within this context that the overall installation becomes a memorial to an era gone by. Abstract and artificial, these sculptures offer distant and heavily mediated representations of that time; icebergs as digitally preserved cultural artifacts, 3D scans of the last remnants which now require technical augmentation to give form to their remembrance. A second major element, developed in collaboration with local gardening and horticultural groups, extends this memory to the fauna of this lost ecosystem through the planting of gardens. These groups, with intimate knowledge and experience of Vancouver climate patterns, make visible a reverence for the plant life which is sustained by its fragile regional ecology. Together, these interventions gesture towards multiple scales of time, engaging both future and past as they reflect on our damaged present.